This Dow Jones Global Top 50 innovation and manufacturing company was undertaking a large-scale
re-organisation of systems, technology, processes and structure across Western Europe. Unprecedented
levels of change were being experienced at all levels of the organisation and this was creating higher levels of
stress and disengagement than ever before.

The key objective of the training was to help employees to sustain high performance, whilst safeguarding
their wellbeing through change. Our approach was designed to maximise results for a minimum amount
of time spent out of the office. We achieved this through:

The programme was trialled with senior leaders first (including the European top team), and then ‘Building Personal Resilience’ training was offered to all employees across Western Europe including leaders, supervisors, front line employees and manufacturing workers (> 10,000 employees in 12 countries). Delivery was in four different languages (English, French, German and Italian);

Research by Cognacity and Kingston Business School showed that the training delivered improvements to a
number of outcomes, particularly in the field of wellbeing and psychological health.

The impact of our programme was measured using a variation of psychometric measures. These results analyse each attendee’s psychological features and work-related stress. The Shortened Resilience Scale (SRS) questionnaire was completed by 507 attendees. To assess the effectiveness of our programmes we compared the respective risk-levels of attendees before the workshop and after having completed the 21-day behavioural challenge. 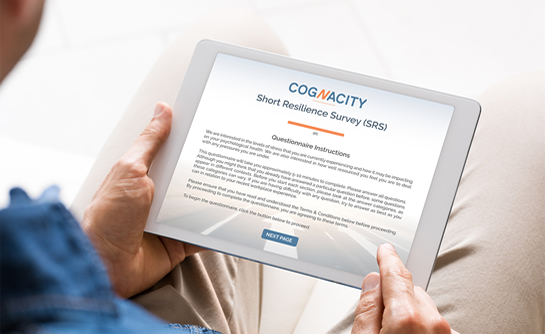 We used the General Health Questionnaire (12-item version) to measure the mental health and wellbeing of BDO’s attendees and then compared this data against the general population and the corporate client norm. This measure identifies the presence of a common mental health disorder (CMHD). Examples of CMHDs include anxiety disorders and mood disorders.

The risk of 3M attendees developing a common mental health problem decreased by 32% (measured 4 weeks after the training).

To measure an individual’s resilience, we used a six-item measure called the ‘Brief Resilience Scale’. Responses to these questions indicate an individual’s perception of their ability to bounce back from stress. Resilient individuals can recover from stressful experiences quickly and efficiently.

After attending a resilience workshop with Cognacity, 20% of 3M attendees improved their resilience levels from ‘low’ to ‘high’ resilience.

Burnout is a psychological state when someone is chronically exhausted and overwhelmed with work, to the extent that they are beginning to disengage. We measured the risk of experiencing burnout with a shortened version of ‘Maslach’s Burnout Inventory’, in this section we’re discussing ‘Emotional Exhaustion’.

After attending the number of attendees suffering from emotional exhaustion decreased by 7% (4 weeks post training).

Report produced by Dr Rob Archer, Director at Cognacity.  If you have any further questions about this report, please get in touch with Rob by email: r.archer@cognacity.co.uk